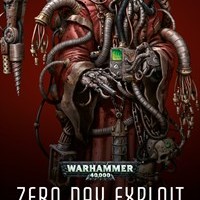 A companion piece to Gods of Mars, this was part cool Mars story, part William Gibson homage. It involves a ‘Spiker’ mission, a hack into the forge of an Archmagos of Mars, in order to steal data, but ends up as far more. The characters who came out of this story all had names that reflected the style of story (as anyone in IT Security can attest) and ended up far more realised and fun than I’d expected. I mean, you always want your characters to be cool and memorable – at least in your own head! – but given the space of the story, I was particularly pleased with how these guys ended up on the page. Though, to be honest, I didn’t expect any of them to survive, but by the time I got to the end (and given the thoughts I’ve been having in regards continuations of threads left frayed at the end of Gods of Mars, it seemed churlish to just throw them in front of the bus. After the response to a certain Dataproctor who appears in Knights of the Imperium, it also seemed like a good time to roll out the return of Adept Nemonix (a character whose constituent parts of his name particularly pleased me). Let’s put it this way, if I do decide – or I’m allowed – to do another …of Mars book, there’s plenty of avenues left to explore.