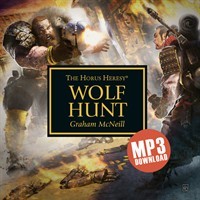 Severian of the Luna Wolves is on the run, pursued by Yasu Nagasena. Will he manage to escape the clutches of his hunter, and can he evade the vengeful Black Sentinels? But others have their eye on this pursuit, and their motives will not become clear until the hunt is over.

This was an audio drama I’d wanted to write for such a long time.

One of the joys of writing in the Horus Heresy is that you get to plant seeds and threads for other writers (or yourself) to pull on later, small scenes that appear to make no sense or wilfully contradict what’s gone before, which you can later pay off down the line in a way that makes the reader go, “Ah…that’s what you were doing!”

One such thread appeared in The Outcast Dead, where lots of people (rightly) pointed out that the arrival of Magnus at the Imperial Palace to deliver his warning didn’t make sense chronologically. True. It doesn’t. Unless there’s something else going on you don’t know about. There’s a tendency to cry Foul! in such circumstances, but when it’s part of a plan, I have to bite my tongue and think, “wait…wait…wait…now!” The discussions had in our regular Heresy meetings were the source of this moment, and the insight of Chris Wraight helped greatly with the seeding of this particular gem…

But that’s the ending, back up a little. One of the story arcs I originally planned for The Outcast Dead, but jettisoned as I realised it was an ending too many for the book, was what happened to Severian in the wake of the slaughter at the Temple of Woe. Another reason I got rid of it from the novel was that, in talking with Black Library, we realised it would make a great audio. A two-hander with Severian and Nagasena (another of my favourite characters from that novel) hunting one another through the Petitioner’s City.

Neither man’s motive is entirely clear from the outset, and thus the outcome was hopefully a less than foregone conclusion. I loved writing the conflicted Severian, and Nagasena is always fun to write, so pitting those two against one another was going to be a lot of fun. Their dialogue has many levels to it, and how they get to their ending, and what transpires there, sets up another arc I was keen to explore. You’ll read some of that in Vengeful Spirit, some in other places that even I don’t know yet…