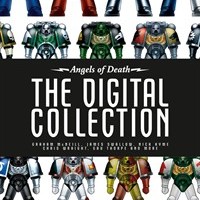 The fight to destroy the World Engine has cost the Imperium dear. The Astral Knights are all but destroyed and their successors stand ready to take what was once theirs. But what happens to Space Marines with no Chapter…?

This was the first of the thousand word shorts I wrote for the Space Marine assault on Games Day UK 2013. Unlike the others I did, this one didn’t appear digitally or in the program, but was a bonus story for the Angels of Death anthology alone. Writing a thousand worder is a tricky proposition, the story needs to be over and done with quickly, but still needs a beginning, middle and end.

As a story to end the anthology, this story has a pervading sense of melancholy, of a torch passing from one bearer to the next and one door closing as another opens. It dealt with the fallout from the World Engine, the scene of the Astral Knights ultimate sacrifice. They were destroyed as a functioning Chapter, but what happens to those warriors whose proud legacy is no more? The Sable Swords might have gone in with a very specific set of instructions, but what they saw within the abandoned fortress monastery changed that radically.

The Astral Knights are no more, and the Sable Swords now sit in their halls, but I don’t think that’s the last we’ll see of those Angels of Death…