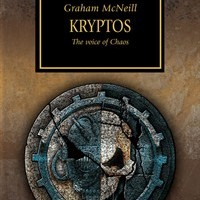 On a devastated Forge world taken by the forces of Chaos, a new and hideous mutation has allowed the enemies of the Imperium to craft an unbreakable code. Two warriors of the Shattered Legions seek a way to break that code.

With the rise and rise of digital publishing, it’s become even easier to get stories out there. And with the advent of Digital Mondays, the Black Library has been at the forefront of producing clever little stories on a regular basis.

Kryptos was a story that came out of a desire to show the Loyalist Legions of the Heresy kicking butt. A lot of the stories we’d been putting out had the Traitors in the ascendency, showing their enemies just how awesome they were and revelling in the shock and awe of their betrayal. We’d all come to the conclusion that it was time to show the Imperium taking the initiative and bringing the fight to Chaos. We needed to make the outcome not a foregone conclusion (though we already kinda do…).

It was never going to be a long story, and inspired by the events surrounding the Enigma machine, I set about telling a tale of two warriors cut off from their Legions who had banded together with others to keep on fighting. From two Legions who’d been gutted at the Dropsite Massacre, Sharrowkyn and Wayland, are two characters who refuse to give in, who will not take crushing defeat as their ending. Together with others survivors of the Shattered Legions, they are going to show the traitors that they’re not going to have it all their own way.

Behind enemy lines is a trope I’ve always loved, and contrasting the expertise Sharrowkyn has in this arena with the tech-savvy know-how of Wayland seemed like a great excuse for a mismatched, yet effective duo. Hunting for the Kryptos, an alien/Mechanicum hybrid creature on a dying forge-world was tremendous fun and allowed me to show off loads of cool ninja stuff for Sharrowkyn, and lots of SF toys for Wayland. After writing this story, I knew I wanted to use these two again, and luckily for me, the opportunity arose with Angel Exterminatus…