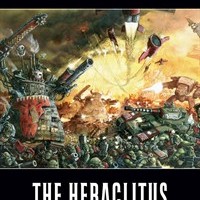 When the world of Golbasto comes under attack from the Iron Warriors, it is just the first move in a plan that will have terrible consequences for a distant Imperial world and the Ultramarines warrior who saved it.

I looked long and hard into how to destroy a planet for this story. Turns out it’s a lot harder than you might think. Most of the ‘traditional’ ways (Death Star ray, overloading the core…) are much harder to do than your average bod could manage, so using a biological agent to stimulate something else to do it seemed like a logical idea. If you can’t do it yourself, get something else to do it. This brought Honsou, a much loved character from Storm of Iron, back to the pages of BL fiction, and what better way to return than by destroying a planet? This was the beginning of a story arc that was going to culminate way down the line, as I’d always envisaged Uriel Ventris and Honsou having a scrap again, and this ‘laying down of the gauntlet’ was the opening move. I knew that to get Honsou to the point where he’d be a credible threat, he needed to do some cool, bad guy stuff, and this was the perfect opportunity. It reintroduced his warband and placed them on the path that would eventually lead to New Badab and the Skull Harvest.