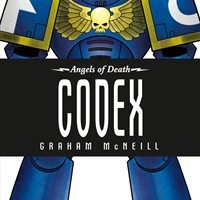 On a world of the Mechanicus, the scions of a noble house are taken captive by orks. Uriel Ventris and the Ultramarines must follow the teachings of the Codex Astartes to see them freed and the orks destroyed.

One of the digital thousand worders commissioned for the run-up to Games Day UK 2013 (which has since been collected in the Angels of Death anthology) this was an interesting little tale. I hadn’t gone back to Uriel Ventris and the Ultramarines since The Chapter’s Due, and I wanted to take a little refresher, an aperitif to loosen up the mental muscles. This story, together with a little nod in The Beast of Calth, serves as a tiny prelude, prequel tale to what’s going to happen in The Swords of Calth (the next novel in the Ultramarines series).

A lot had happened to Uriel since he first graced the pages of a Black Library novel; two victorious campaigns, a Death Oath, a return to Imperial Space via a planet tortured by its grim past, a war against the Tau and a full-scale Chaos invasion of Ultramar… So Codex was a chance to get back to basics, a chance to show that Uriel has learned a great deal from those experiences, that he’s grown and become the Ultramarine he always needed to be. But, as things turn out, that might make him somewhat less sympathetic than he was before…