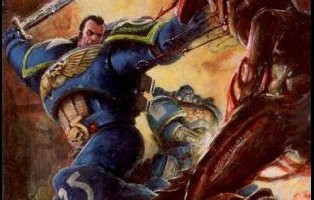 When asked to honour an ancient debt, Captain Uriel Ventris and the Ultramarines find themselves standing shoulder to shoulder with brother Space Marines and local Imperial Guard units, defending a vital industrial system. The Tyranids take no prisoners and show no mercy, consuming all in an attempt to sate their unending hunger for bio-matter.

By now I was on my third book, the ‘difficult third novel’ and was back with the Ultramarines. Nightbringer had done pretty well and had been well received by the fans, and Storm of Iron had also done well (it’s still a book plenty of people want to talk to me about). With Warriors of Ultramar I wanted the Ultramarines to face an archetypical foe, which for the Ultramarines, don’t come any more archetypical than the Tyranids. I mean, these guys have a history. Having your entire 1st Company wiped out by these aliens is enough to give anyone a bit of a complex, don’t you agree? I’d also looked around the current issue from the Black Library and seen that there weren’t really any books that featured the Tyranids in any meaningful way (as far as I could see). This made them the perfect villains for the book.

I set out writing the book armed with a much more detailed synopsis than I’d done before, and this was a great help and has formed the basis of how I work on a book now. Each book is broken down into a chapter-by-chapter plan and before I get anywhere near the keyboard to type, I jot down what’s actually happening. It’s all very well saying in a synopsis, ‘they escape from the cell’, but that’s not much use when you come to actually write that scene… Armed with this method of writing, which every other writer has probably done for years and is thinking, ‘Well, duh…’ I romped through this book at a fair old clip and was finished in plenty of time to meet my deadline.

In this book I got to play with Inquisitor Kryptman, a character that’ll be familiar to fans of 40k as the galaxy’s leading Tyranid expert. This was a lot of fun and it was great to have such a larger than life character chewing the scenery, though it was also a challenge to portray him as the thousands of people out there thought he should be portrayed (little did I know at this point that in years to come I was to get to play with Horus, Fulgrim and, in one story, the Emperor…). When I was writing Warriors of Ultramar, something Andy Chambers – the writer of the original Codex: Tyranids – said to me about these extra-galactic horrors. He reminded me that the invasion of a planet by the Tyranids happened from the microscopic level to the gargantuan and that what we saw on the tabletop was simply the tip of the iceberg. I tried to convey the feeling that this invasion was happening on such a massive scale that, even were the defenders to repel the alien attack, that their world would never be the same again.

As the story moved on, I began thinking of where I wanted to take Uriel and Pasanius next. I realised I didn’t simply want to write a book where they received a call for aid and went to the next planet and kicked the bad guy’s ass/pseudopodia/warp hole. I wanted to do something different with them, so pretty much killed off the bulk of the 4th Company so that I wouldn’t be tempted in a moment of weakness to take the easy way out. If you’ve read Dead Sky, Black Sun…you’ll know I didn’t.