It’s been a busy time for me. And this is good. As you’ll have noticed if you’re reading this, I’ve a new website up and running. I haven’t had that for a while, so it’s nice to be able to chat to you at more length that Facebook or Twitter allows.

First up, thanks to Ragnar Karlsson for getting the website together and helping me structure it just the way I wanted it (and for dealing with my techno-luddite questions and problems along the way). Now I can update the website myself and put in pretty pictures and words without a lengthy instruction manual.

Anyway, like I said, it’s been a busy time for me. For one thing, when I came to list all the writer’s commentaries I’d need to write to bring the website completely up to date…I saw that I’d written a lot of things in two years. I think the technical term is a Shedload (or similar…). So, I spent a few days revisiting all the novels, short stories and novellas I’d spent the last two years writing, and that was a nice trip down nostalgia lane – going back and remembering where I was and what I was doing at the time. What was I thinking about when I wrote that particular story and what had been the outcome of it? As a writer you’re always pushing forwards, onto the next project, the next character and the next arc. It’s nice sometimes go back and look over what you’ve achieved now and then. Anyway, if you’ve a favourite story, go have a look and peek behind the curtain…

I’ve also finished Vengeful Spirit, my latest Horus Heresy novel, which is one I’m particularly pleased with in how it turned out. It brings the Warmaster and the Sons of Horus front and centre again, which is something I’ve wanted to do for a long time, and, let me tell you, I’d forgotten how much fun it is writing for Horus.

Then it was a novella. These are always good fun, as the story is a much more tightly focussed thing, as you don’t have the room to sprawl and lounge like you do in a novel (or at least, the room to sprawl and lounge like I do in a novel…). Longer than a short story, with extra room to breath, but it’s still a tightly controlled beast. That’s a challenge for me, as I like to explore the digressions and tangents I come up with along the way, but I think a novella gives a leaner, meaner reading experience.

And now I’m working on Gods of Mars, the third part of my Mechanicus trilogy. Based on what I’ve been hearing from people – online and at the Weekender (more of which later) – it seems folk have been really digging these books. I’ve loved writing them, as it’s been a great chance to go somewhere new and explore the kinds of stories we don’t see that often. It’s in the early stages yet, but is going well, and I can’t wait to pay off a lot of the threads begun in the first two books…particularly the one involving Galatea.

I’ve also been busy with travel. A fortnight ago, I went over to Modena for Games Day Italy. So that’s me got all the Games Day locations ticked off now. I took Anita and the kids with me, and despite the difficulties of trying to get a four and two year old to sleep in a room you’re sharing with them, we had a blast there. Modena’s a very picturesque city (though a bit of sun might have helped…) and we took a few days just wandering its streets, eating lovely food and drinking nice wine (Anita and I, not the kids). 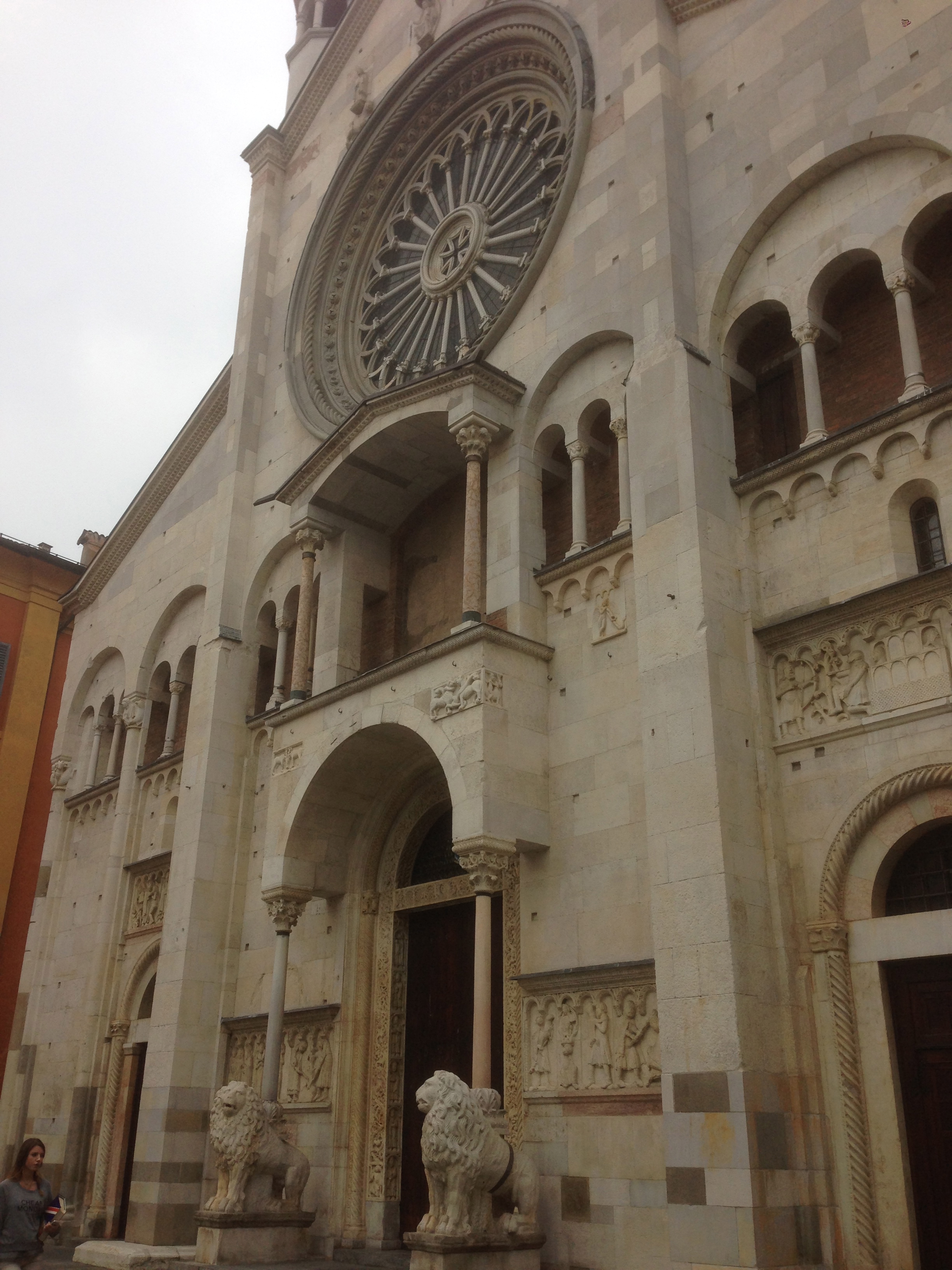 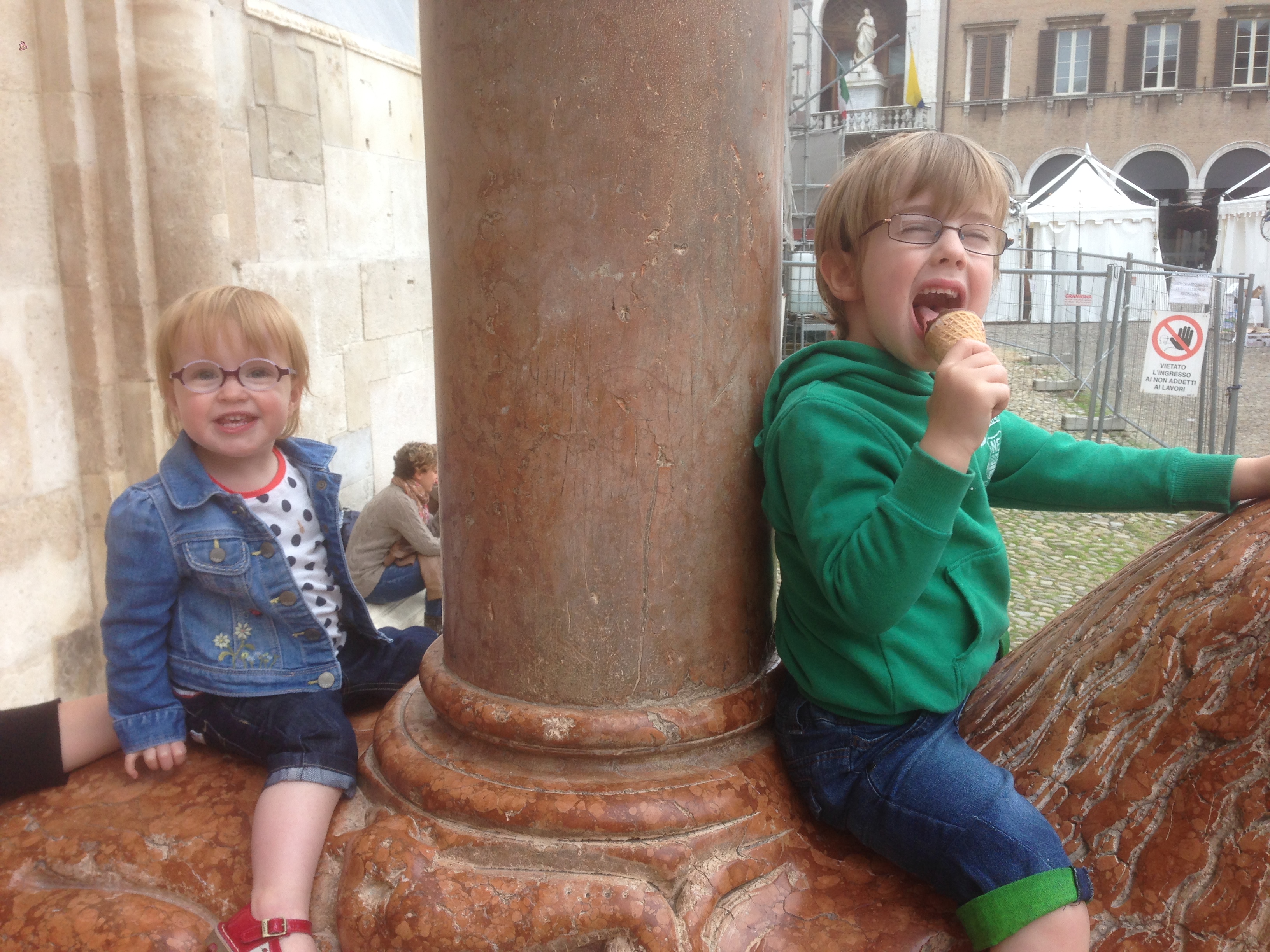 Games Day Italy was a lot of fun. It’s a smaller event than some of the others, but the passion for the hobby and the books was just as strong as any other I’ve been to. Mal and I were kept busy for the day talking to fans and signing books. I even did a reading from Priests of Mars, which simultaneously appeared behind me in Italian. I think it went down well, though the acronym FISH (fighting in someone’s hab) didn’t quite work as the Italian word for fish is something quite different…

The staff were great, so thanks to everyone there, especially Fabio, Antonio, Andreas, Rocco for making it such a great Games Day. Evan and Amber made lots of friends by saying Ciao Bella and Ciao Bello at everyone we met, and Evan even got himself a wee Italian girlfriend on the plane back home. An older girl (she was ten and he’s only four) but you can’t fault him for effort…

And then it was off to Edinburgh. Baz of GW Edinburgh invited Jes Goodwin and myself up to his store for it’s 25th birthday. Twenty Five Years. How awesome is that? How many other shops can say they’ve been going for that long? I’ve been to the Edinburgh store many times over the years, and even though I hail from Glasgow, I always get a warm welcome there! I got up at lunchtime and the store was hoaching, packed wall-to-wall with gamers and readers. Jes was in the thick of it, holding court and wowing folk with his sketches and concepts and general aura of cool. Together we spent the next six hours talking to folk about anything and everything, from writing to models, to gaming, to Spartacus, to the various methods of body disposal… Kudos to Baz for getting it all organised and to all the staff who’ve ever worked in the Edinburgh store for keeping the hobby alive all these years. 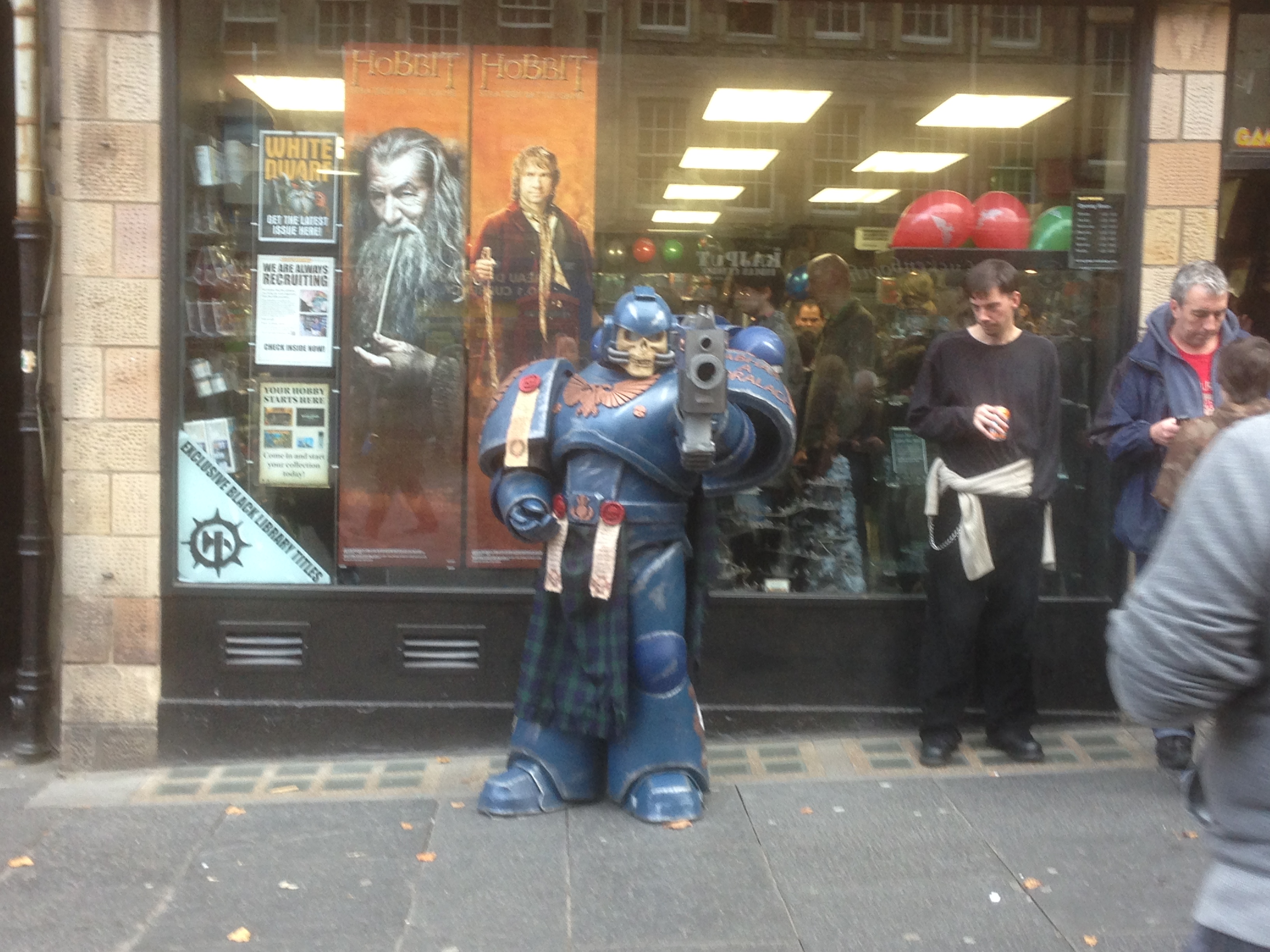 The welcome I received at Games Workshop Edinburgh…

Needless to say we went out in Edinburgh that night, and had a cracking time in Auld Reekie. Then it was back to Nottingham to see Anita and the wee ones. As great as events are, you can’t beat coming back home to see the people you love.

And to crown it off, the weekend just gone was the Black Library Weekender II. I’ve said it before, and I expect I’ll keep saying it, but the Weekender events (both Black Library and Horus Heresy) have shot up my list of favourite events to the top. The fact that writers, artists, editors, and fans can spend an entire weekend hanging out is what makes these the ‘must attend’ events of the year. It’s relaxed, informal, loose and open. Folk get their books signed, we hang around on the couches and chat or get a coffee or a beer. There’s not the same pressure of a Games Day where it’s all compressed into a few hours. I look forward to meeting loads of folk I’ve come to know over the years, and just shooting the breeze with them. 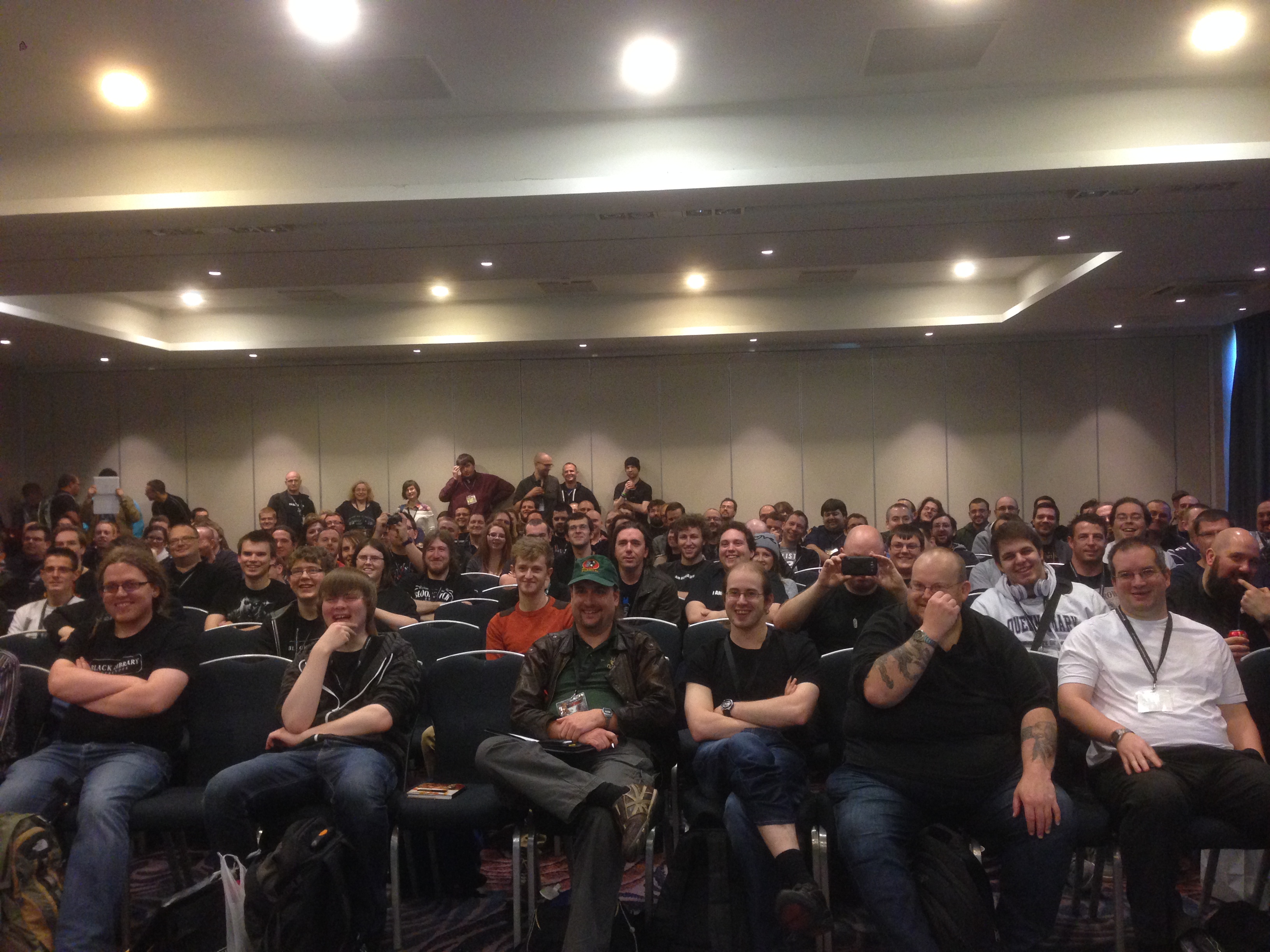 Look at all the people!

Given the location, we can do panels, seminars (though I think small workshops would be a great idea for next time…) and signings. It’s great to have the space and time to expound more fully on the stories and characters and themes. It’s great to answer the fans’ questions and riff with the other authors on panels – I’m looking at you Dembski-Bowden. It’s also a great chance to catch up with my fellow writists and daubers. Writing for Black Library has allowed me to meet and become friends with a tremendous bunch of folk and it’s always a pleasure to chew the fat with my fellow pen-monkeys and editists. And having ‘male-model’ Neil Roberts around never hurts either. David Annandale was over for the event, but, sad to say, I didn’t get a chance to properly sit down and natter with him, but that’s always the way of it. We have an author space where we can retreat to grab lunch, some water, coffee etc, but I never spend too much time in there, as it kind of defeats the purpose of the Weekender, which is being part of the event, celebrating the things we, as a hotel full of geeks, all love.

Regrettably, I didn’t get to take part in the evening’s entertainment, as I had a friend’s stag night in Nottingham to go to. I’m told it was great fun, and here’s Laurie Goulding’s Tweet after he’d been ‘forced’ to re-enact that scene from The Reflection Crack’d: “ARGH! NO! YES! NO… AND POTENTIALLY ALSO YES!” – Fulgrim, in ‘The Reflection Crack’d’ (paraphrased)”

Sunday was a much more relaxed affair, with KaffeKlatches in the morning, followed by a signing session and then the Horus Heresy Mega Panel, which had me, Jim, John, Nick, Dan, Aaron, Chris and Neil on board to answer questions and mess around. It started with us being a bit silly, but rapidly got to some good stuff, and had a lot of questions that have set my mind racing on some nice ideas for The Crimson King and others. Oh, and there was also the cover for Vengeful Spirit on display – which I think a lot of people are excited about… If the Overlords agree, I’ll post it up here soon. 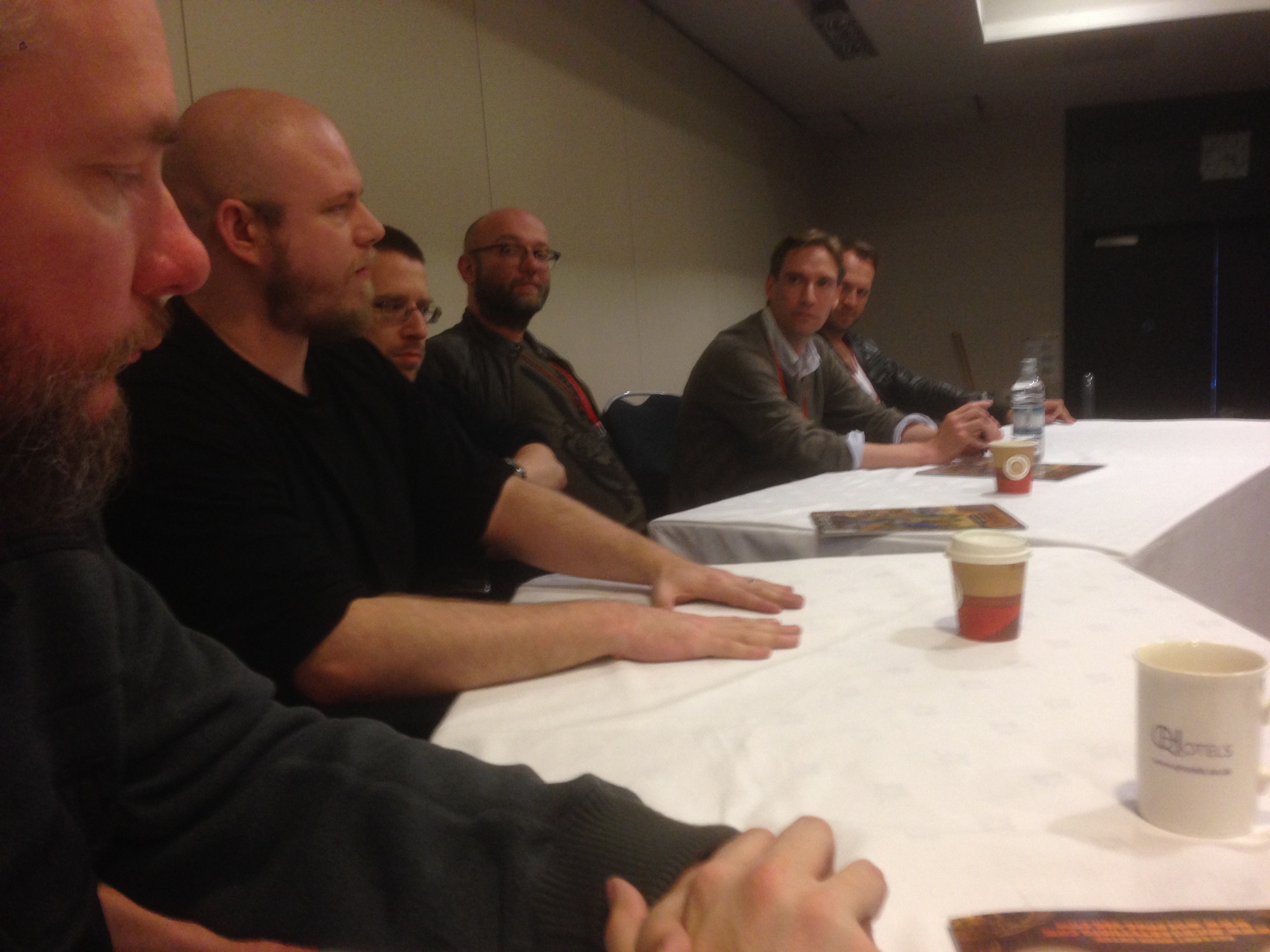 So that was the Black Library Weekender II. A roaring success, great fun and bigger, better, faster than last year’s event – no mean feat I think you’ll agree. So if you went to the Weekender II and had a good time, get in touch with the good folk at Black Library who worked incredibly hard to make it such a top-notch event. They all went above and beyond to make sure we, you and everyone involved had a fantastic weekend. Especially Claudia, who always takes great care of us all (and always indulges my ‘no salad’ diva demands!) and makes sure the event goes without a hitch. And, of course, thank you to everyone who came along, chatted and hung out and got their books signed. It wouldn’t be the Weekender without you guys, so thank you most heartily!

I think that’s it for events for this year, so it’s nose to the grindstone now to get Gods of Mars finished. See you beyond the Halo Scar and talk to you all soon…