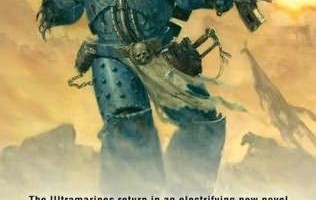 In the nightmare universe of Warhammer 40,000, no servants of the Imperium are more dedicated than the Ultramarines, who follow the teachings of the legendary Codex Astartes to the letter. Having escaped from the Eye of Terror, Uriel Ventris and Pasanius now face an epic journey through a hostile universe in their quest to get home to Ultramar to safety and redemption.

My return to the Ultramarines was something of a watershed moment for me. This was me going back to the heroes who’d started me off on my writing career. Whereas the first few books of the Ultramarines had been written as individual books, I now had the confidence and flex to plan out books as arcs. I immediately saw that I couldn’t just have my heroes return from Medrengard straight away (where I’d left them at the end of Dead Sky, Black Sun), as that would be a total cheat. When I was writing that book, I was toying with answering how they got off the daemon world and where they ended up as a Quantum Leap style episode end, but given that my deadline was looming and I didn’t want to paint myself into a corner with a split-second decision I hadn’t thought out properly, I decided against that. Lucky for me…

The Killing Ground was the more ‘intimate’ of the next three book ark, as I saw them building from just Uriel and Pasanius, to their company at war, and finally to their Chapter at war. It was a logical progression and one that allowed me to build on the previous book and drive the plot and stakes higher and higher. So with that established, this book was very much the ‘voyage home’ story, where our heroes re-enter Imperial space and make contact with Imperial forces. The sudden emergence of two Space Marines would lead to lots of questions and that made for an interesting book where you had to question their loyalty, motives and reason for not telling where they’d come from right away.

The villain of this piece (if that’s what he was…) was Leto Barbaden, a man who is, ostensibly, on the side of the Imperium. I remember at the beginning of the project when I was asked which of the various xenos races were the bad guys. I replied that the villain of the piece was the capacity for violence and terrible deeds in the hearts of everyone. Not an easy sell, but I didn’t just want to pick a codex and say that they were the baddies. I wanted to make this a bit more complex, a story where the Imperial Governor was the villain, but not in the usual way (possessed by Chaos, a power hungry ego-maniac, dealing with aliens etc). By Imperial standards, he was doing the right thing, but that sat ill with the Ultramarines, and, by extension, the Grey Knights.

Bringing Uriel and Pasanius down on Salinas was my way of telling a story involving themes that had been buzzing around my head for a while. I had long wanted to tell a 40k ghost story, and this seemed like a great way to do it. It was also a way to tell a story of war without actually being in the war and revelling in the killing, the way a war novel often can. There was nothing glorious about this war, and the consequences of that war were telling in all manner of horrible ways on the men who participated in it. In 40k fiction we take for granted that once the war’s over, the soldiers go onto the next one without any of the trauma and change that affect real-world soldiers, so this was a way of exploring that to some degree (in a fantastical setting, admittedly, but still…). Uriel and Pasanius’s participation in this story cemented the lessons they’d learned in Dead Sky, Black Sun – that not following the codex leads to Bad Things – and was a way of tidying up loose ends in preparation for them returning to the Ultramarines.

The biggest loose end was, of course, the Unfleshed. Whereas Uriel truly hoped they could be brought back into the fold, that was never going to happen and could only really end badly for all concerned. I knew that they’d have to go through the wringer before they got to that ending, but that when it came it would need to be at Uriel’s hand. Any other ending would feel like the Unfleshed were being punished and that’s not what I wanted for them.

The inclusion of the Grey Knights was something I wanted from an early stage, as thy would give our heroes a proper stamp of approval when they got back to Macragge. If a Grey Knight turned up and told you these two guys are pure of heart, you’d probably believe them…And I hadn’t really seen a Grey Knight in print I’d really thought matched what I thought they should be, so this was my attempt to give them the look and feel I thought they needed. Though it was light on shooty death kill until the ending, it felt right that the action be somewhat muted in this book, as I knew what I had planned for Uriel and Pasanius in the next novel…