Dweller in the Deep 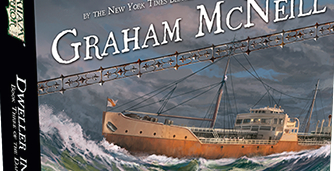 Having learned the shocking truth behind a plot to cast the world into unimaginable darkness, Miskatonic University professor Oliver Grayson and his team of unlikely allies must arm themselves with deadly weapons, powerful eldritch artefacts, and the most potent tool an investigator can wield: knowledge. The stage is set for one ultimate, heart-stopping race to save mankind!

And so we come to the end of the Dark Waters trilogy. Hopefully by now you’ve finished the book, but if not then look away now, as this will be a writer’s commentary filled with spoilers. I’ve said before that the previous two books were the ‘running away’ one, the ‘learning’ one and that Dweller in the Deep would be the ‘fighting back’ one. That’s true, but there’s also a lot of running away and learning in this one too. And dying and going mad. It’s Lovecraft, after all…

I loved writing the first two books in this trilogy, but this book was the icing on the cake, a chance to tie off a great many of the threads begun in the earlier books. Of all three novels, this was the book for which I had the clearest vision and the most robust structure. When I’m planning a book, I like to merge the notions of architect and gardner in terms of the kind of writer I am. I like to have a structure in place, but one that’s robust enough to carry the weight of the plot, but flexible enough to allow for change and development as I go along. Unusually for me, this outline was pretty rigid, but it still threw me a few curveballs along the way. And that’s just the way a book should be, it should constantly surprise you. The characters should behave in ways you didn’t expect and the plot take turns you didn’t even know existed before you got to them.

Let’s put it this way, where everyone ended up at the end of this book wasn’t where the synopsis said they ended up. Of all the characters to survive this intact, Rex and Minnie weren’t the ones I had in mind. Rex kind of had to survive (what with being a character in the game – though I’d been given tacit permission to kill off an in-game character if the rationale was strong enough) but Minnie had corpse written all over her from the minute I realised she was in love with Rex. But you know what, the more I wrote her, the more she wasn’t going to get put down that easily. Every time I wrote some foreshadowing of her eventual fate, I ended up taking it out or massaging it to a point where it wasn’t quite so definitive.

The trip across America with Charles Lindbergh was something that came out of a role-playing session we’d had in our gaming group, as are a good few of the memories Morley Dean has when he’s pondering alone in Hillshore’s apartment in San Francisco. I’d be lying if I was to say that elements from our last Cthulhu campaign hadn’t made their way into the book; not least of which was the presence of Morley Dean and Charles Hillshore.

I’ve always been wary of putting things from home-grown games into works of fiction, but those two characters – played with great vigour and aplomb by Phil Kelly and John Michelbach respectively – formed such a cornerstone of our sessions that it was impossible to think of not including them. Both characters were so brilliantly drawn that it was no trouble at all to put words in their mouths that sounded like the two characters I’d come to know in years of being a Call of Cthulhu Keeper. There’s other nods in there to our gaming group, but I like to think I kept them to a minimum and only dared employ them when it felt absolutely right and didn’t stick out like a deep one in a bowl of soup.

This story gave me the chance to use a whole host of monsters. I’d tried to be sparing in their use throughout the earlier books, but with Alexander’s evil plan now approaching completion, I felt it was time to throw caution to the wind and throw all my favourite monsters at the page – all in the best possible taste, of course. So we have a slimy Cthonian, Nightgaunts, Shoggoths, Mi-Go, Ghouls and one of my favourite monsters, the Hound of Tindalos. That anyone could face such horrors and triumph perhaps beggars belief, but then this is Arkham Horror, not Lovecraft himself (who, if you notice, also makes a cameo in this tale…).

So, now the story’s told. Everyone’s either mad, desperate, catatonic, dead or steeped in black misery.

Now, that’s the way a Lovecraftian tale ought to end.