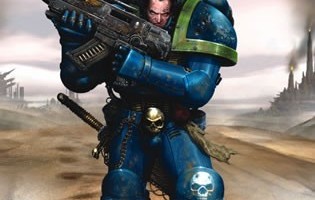 Uriel Ventris enters the dreaded Eye of Terror with a dreaded Death Oath placed upon him by his Chapter Master after being banished from the Ultramarines for breaking faith with the Codex Astartes. Here he will face his darkest nightmares, temptation and a dreaded foe who will become his greatest nemesis.

Ah…Dead Sky, Black Sun…this was a hell of a book to write. Not because of any mad deadlines or trouble with the plot or characters not behaving themselves, but because it was such a grim, dark and bloody book that never once lets up from the hell the characters find themselves in. Having consigned Uriel and Pasanius to a Death Oath, I then chucked them into the Eye of Terror for an adventure on the daemon world of the Iron Warriors, Medrengard. This was an exercise in doing something truly nuts and to flex some imaginative muscles that needed a work out.

As a quick look at my bookshelf would tell you, I like my Clive Barker and have pretty much everything he’s put on the page. The sheer breadth of imagination in his work is just staggering and this was my attempt to create some weird, messed up stuff, like the creations that march across Mr Barker’s pages. Thus things like the Savage Morticians, the Unfleshed and the Heart of Blood were born. I wanted make people sit up and take notice that this wasn’t going to be like any 40K novel they’d read before. I wanted reactions, be they good or bad…

In Dead Sky, Black Sun I think I was able to do things that hadn’t been seen before and which people hadn’t expected. Most people who read it weren’t expecting the sheer madness and nastiness it contained and the book surely merits an 18 rating (that’s NC-17 rated for my American readers) for its content. Some people really liked that, others didn’t – though I particularly loved the review that appeared on Amazon that dubbed me the ‘Lord of Debauchery’ and claimed that the gore ‘would probably make Adolf Eichman turn green and toss his cookies’. I printed this out and have it on my wall as a triumphant reminder that I achieved what I wanted to achieve. Indeed, for a time my title at work was Lord of Debauchery. How cool is that?

Though you might not realise it, the model for this story was the ace WWII film, Where Eagles Dare (penned by Alistair McLean) and one of my favourite films. The month Dead Sky, Black Sun was released by the Black Library, was the same one that saw Dan Abnett’s Traitor General released and which saw the pair of us doing a seminar together at UK Games Day in Birmingham. Interestingly, during the seminar it became apparent that both of us had, independently taken the same film as a thematic template for what was happening in our books. An odd coincidence to be sure, but one that still makes me chuckle.

At any rate, when I typed ‘The End’ upon finishing the book, I took a walk out into the sunshine and just stood there for a while to clear my head of the monstrous things I’d been putting my characters through and the terrible, blood-soaked battles they’d fought. One thing was certain; my next novel was going to be something brighter and more magical, not nearly so steeped in misery and death. Kind of.