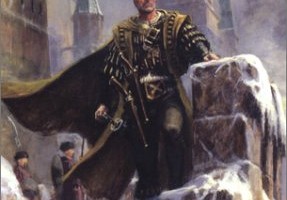 Grizzled ex-general, Kaspar von Velten, find himself inadequately prepared for his duties as the new ambassador to the court of Tsarina Katarin of Kislev. Unused to the power struggles and politics at court, Kaspar soon learns to apply his battlefield experience in order to cajole, influence and get his own way. But when the Tsarina’s cousin is found murdered in a debtors prison in Kaspar’s homeland, relationships become strained to the point of war. Amidst this crisis and prophecies of impending doom, a bestial serial killer prepares to strike at the very heart of power. Graham McNeill’s first fantasy novel is set against a grand backdrop of war, political intrigue and Chaos!

If you’ve read any of the Writer’s Commentaries for the short stories then you’ll know this novel originally started life as a planned series of stories that would build up through the issues of Inferno! to become a novel. With the demise of that august publication, that wasn’t going to be possible, but never one to be daunted by such things, I wouldn’t let the idea of Kaspar von Velten’s adventures in Kislev die. I worked up the plot and how events set in motion in the short story could be continued. As is the way of these sorts of things with me, the story kinda got away from me and began to tell itself, unravelling before me in ways I hadn’t expected. Scenes and situations just fell into place and characters leapt, fully formed, onto the page. Some were never intended to be more than someone another character could have some dialogue with, but became full-blown characters in their own right and elbowed themselves centre stage when I had never intended them to be more than a walk on… As such, the tale grew in the telling until we realised it couldn’t possibly fit in one book. Thus was born the idea of doing it as a two-part novel, something that hadn’t occurred to me before, but which I think now was a great idea as it made for a natural break in the story and allowed me some more time to plan out Ursun’s Teeth.

Of all my novels, the Ambassador stands as one of my favourite, as it has a main character who isn’t a great, muscle-bound hero or genetically engineered killing machine. He’s just a man, an old man at that (by Warhammer standards anyway) and he’s not perfect. He has flaws; he shouts a lot and lets his temper get the better of him more often than he should. But that’s exactly what made me like him so much, that he wasn’t perfect, that he was a man who tried to do the right thing even if it made him look like a cantankerous old man to those around him. He was a flawed character, yet still we rooted for him. Kaspar makes mistakes, but he makes them with the best of intentions (don’t we all?) and wasn’t afraid to own up to it when things didn’t go to plan.

By the same token, that’s why I liked the ‘villain’ of the piece, Sasha Kajetan. He was, if not a good man, at least a victim of the dark forces around him. In Sasha, I wanted someone who could be the bad guy of the piece, but wasn’t simply doing the horrible things he does in the book because he’s ‘evil’ – a convenient tag hung around his neck to explain his crimes – but because of the terrible things that happened to him when he was a child. These were things that allowed the truly evil people around him to manipulate him for their own ends and that was the true evil. In the end, I think the Ambassador was a book that marked, at least in my head, a new growth in my work towards stories with a little more meat to them than simply blowing stuff up and having people hit each other with swords (though there’s some of that too, obviously…).